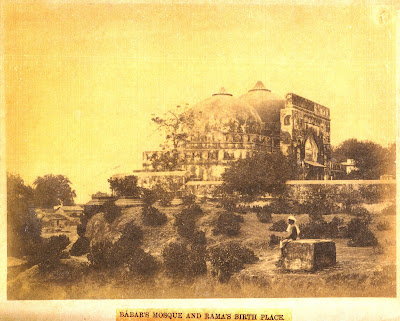 Photograph of the disputed shrine published in P. Carnegy’s book A Historical sketch  of  Fyzabad Tehsil , including the  former Capitals  of  Ajudhia and Fyzabad in 1870. Read more articles on   ayodhyaramatemple.org >> Kishore Kunal  ’s candid views Kishore Kunal is a former I.P.S. officer who was instrumental in mutual negotiations between the Hindus and the Muslims during the days of three Prime Ministers – V.P. Singh, Chandra Shekhar and P.V. Narasimha Rao. He is author of two very authentic books on Ayodhya:   Ayodhya Revisited and Ayodhya : Beyond Adduced Evidence . The first book has the Foreword from the former Chief Justice of India. Justice G. B. Patnaik, whereas another former Chief Justice of India Justice M. N. Veakatachaliah has written Foreword to the second book. Kunal suggested suitable suggestions to all the Prime Ministers in accordance with the situations prevailing at relevant times. Though, after the demolition of the disputed s
Post a Comment
Read more